On Thursday 4th August 2016, the Bank of England, made some historic decisions. 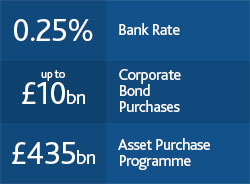 [Courtesy of The Bank of England]

It then increased the quantative easing programme from £375 Billion by a further £60 Billion to take the UK Government Bond Purchase Programme (Asset Purchase Facility) to £435 Billion.

What they also announced is that they will start a £10 Billion Corporate Bond Purchase Programme. What does that actually mean ?

Large listed companies, fund themselves apart from business operations of selling products and services, by selling bonds. They are known are Corporate Bonds. They are bought by professional investors like pension funds, insurance companies and banks. They pay a regular income provided the company does not default. If the owners of these bonds (effectively the creditors to the companies) want to sell them, they are able to trade them on the open market. However in these uncertain economic times it is not always possible to sell them thus if a bank who owns a specific corporate bond, needs cash and tries to sell the corporate bond and is unable to, now the Bank of England will come in as a new buyer, and buys the bond and the bank gets cash from The Bank of England. Thus The Bank of England is providing more liquidity in the market place.

If these bonds are now owned (creditors to BT and Shell) by banks, and the banks need to raise cash, they now can sell these bonds in BT and Shell to The Bank of England.

So effectively The Bank of England is now buying high quality corporate bonds from financial institutions who want to raise cash by selling there bonds holdings. The end result will be that The Bank of England will become a creditor to large organisations who have issued bonds.